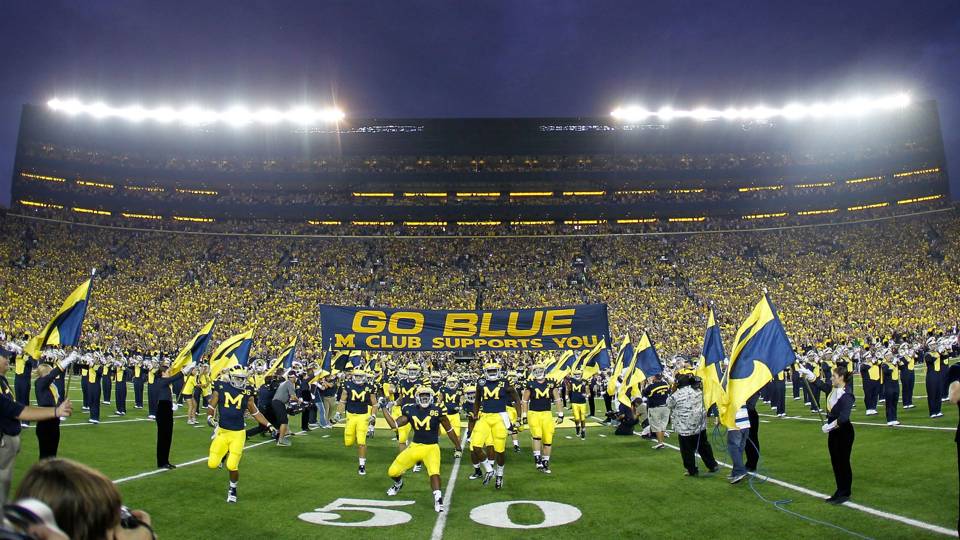 The largest stadium in North America is located in Ann Arbor. The Michigan Stadium – “The Big House” is where you can find more than 110,000 college football fans on Saturday afternoons during the autumn season. Excited fans gather in the stadium to cheer on the Wolverines.

Prior to the stadium’s construction, the Wolverines played football at Ferry Field, which is also owned by the University of Michigan. However, since November 8, 1975, every home game has drawn a crowd in excess of 100,000, an active streak of more than 200 contests. A notable example is on September 7, 2013, the game between Michigan and the Notre Dame Fighting Irish. This game attracted a crowd of 115,109, which was a record attendance for a college football game since 1927. It also beat all of NCAA single-game attendance record at the time, overtaking the previous record of 114,804. The love of fans and excited crowds brought to the many renovations of Michigan Stadium making it the largest stadium in the nation.

Even from the beginning, Michigan Stadium was designed with footings to allow the stadium’s capacity to be expanded beyond 100,000. Fielding Yost, who was the head football coach at Ann Arbor at the time, envisioned a day where 150,000 seats would be needed. He definitely had the right vision but in order to keep construction costs low at the time, the decision was made to build a smaller stadium than Yost envisioned.

Other than being a football stadium, Michigan Stadium is used for the UM’s main graduation ceremonies. In 1964, Lyndon Jonson, the 36th U.S. President, outlined his Great Society commencement ceremonies in the stadium. Other sporting events such as the 2014 NHL Winter Classic, between the Toronto Maple Leafs and the Detroit Red Wings hockey teams, was held there too. Where else, the Real Madrid and Manchester United had an attendance of 109,318, a record crowd for a soccer match in the United States.

For more information on the Michigan Stadium, please see the specific pages below.

Seating Information:
For information on accessible seating and to view the Michigan Stadium seating chart page.

Once the slow wave (5th wave) is finished, the student section reverses the course and send it back the other way at the original speed. On the 6th and final wave, the students split the wave in opposite directions which creates a cross-section effect around the stadium.

If you’re sitting near the student section, do commit these rules to memory and be part of the fun!